The nationwide lockdown, which was supposed to end tonight, has been extended to May 3. State Home Minister Anil Deshmukh says the crowd at Bandra is under control and that the migrants may have thought the prime minister ordered that state borders be opened, PTI reports.

Maharashtra minister Aaditya Thackeray blames the crowd of migrant workers in Bandra on the central government. He says the crowd that gathered to demand they be allowed to return home is a “result of the Union Govt not being able to take a call on arranging a way back home for migrant labour. They don’t want food or shelter, they want to go back home.”

Thackeray tweets that the state has “time and again” asked the Centre for a plan on sending the migrants back to their home states. He says Maharashtra had asked for trains to be allowed to run for 24 hours longer, after the lockdown was announced, so the workers could go home.

The United Kingdom’s economy can shrink 13% in 2020 because of the pandemic, The Hindu quotes the Office for Budget Responsibility as saying. “The resulting 13 per cent fall in annual GDP in 2020 would comfortably exceed any of the annual falls around the end of each world war or in the financial crisis,” OBR says.

Arvind Kejriwal says it’s worrying that the number of cases in Delhi has increased every day. The Hindu reports. He also speaks of a “rift” between Hindus and Muslims. “It is very saddening that some people are trying to create a rift between Hindus and Muslims at this time when we are all going through a pandemic. Nature will never forgive such people who are trying to spread hatred,” he says.

The International Monetary Fund projects a 1.9% GDP growth rate in 2020, PTI reports. This comes amid global economic turmoil due to the coronavirus pandemic. “We project global growth in 2020 to fall to -3%,” PTI quotes IMF Chief Economist Gita Gopinath as saying. “This is a downgrade of 6.3 percentage points from January 2020, a major revision over a very short period.” She says the pandemic will impact growth across the world.

India and China are the only two major nations that are likely to register positive growth this year, the IMF says. The organisation predicts China will grow at 1.2% in 2020.

Migrant workers gather in Bandra, Mumbai, asking for permission to go back to their homes, ANI reports.

Migrants labours are on street in Bandra, Mumbai today, demanding either give them proper shelter, food or let them go at their natives places in Uttar Pradesh , Bihar etc 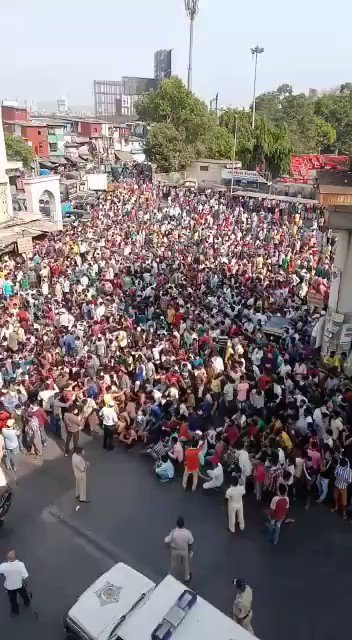 How these zodiac signs deals with stress

Things to do for a soft and healthy skin

5 Ways to Get Soft and Happy Skin

7 things you should know about having sex with an Aries