The number of Containment Zones in Delhi Increases to 76

Eight new areas have been included to the list of containment zones in Delhi.

The total number of containment zones in Delhi increases to 76 after 8 new areas were included in the list today. #Coronavirus 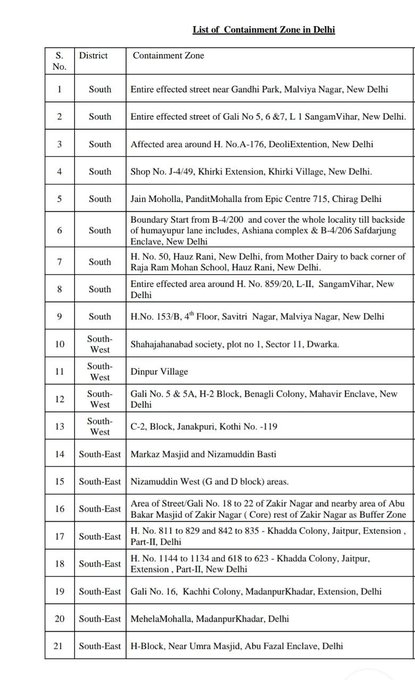 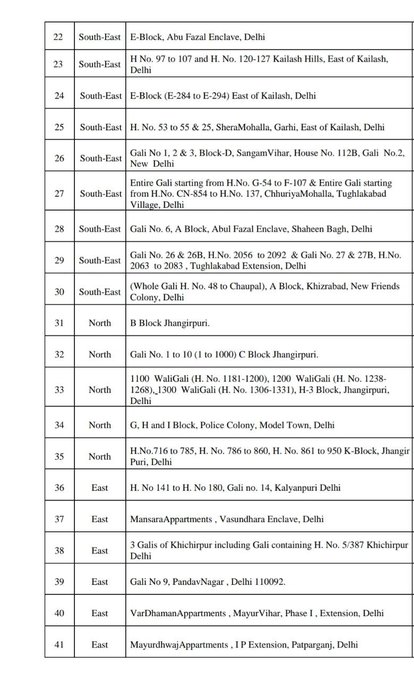 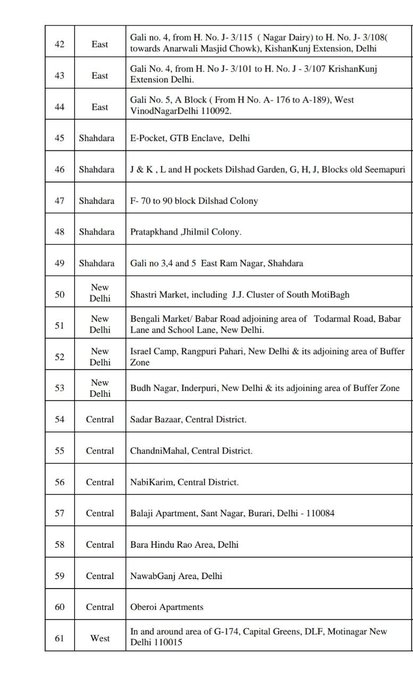 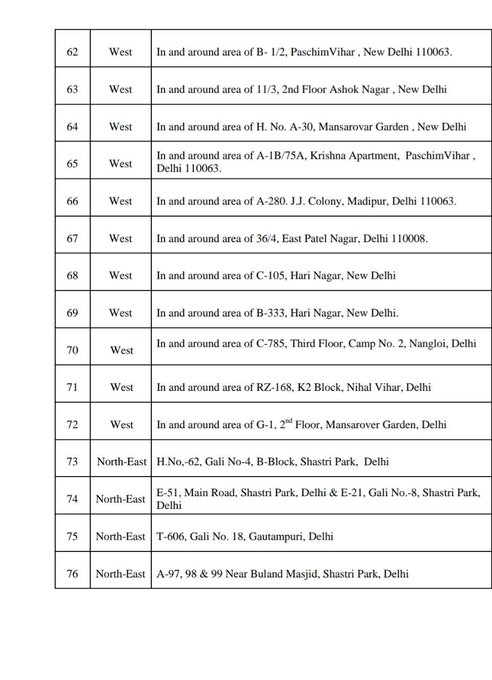 86 Positive Cases of COVID-19 in Bihar

One more COVID-19 case has been reported in Bihar; the total number of cases now stands at 86.

Delhi Chief Minister Arvind Kejriwal said there had been a slight decrease in the number of COVID-19 cases in Delhi in the last three days and hoped that it would reduce further in the coming days.

Addressing an online media briefing on the coronavirus outbreak, Kejriwal said that out of 2,274 samples tested, only 67 people tested positive for the novel virus on Friday.

A few days earlier, the daily tally of infections ranged between 180 and 350.

The chief minister also appealed to people living in containment areas to follow rules and don’t step out of their homes.

49 news cases have been reported from the state of Tamil Nadu which has taken the total up to1,372; 82 discharged.

Karnataka Health Minister B Sriramulu drew flak from his own party the BJP as well as the Congress for allegedly letting hundreds of people throng the Rupangudi Road in Ballari to collect food packets from him.

Visuals showed that the people came in hordes and fell on each other to collect the packets Sriramulu was distributing to the poor and needy as relief measure in the wake of lockdown.

Speaking to the public at the daily COVID-19 briefing, Health Ministry Joint Secretary, Lav Aggarwal said that no new cases have been reported in 45 districts across 23 states in the last 14 days.

He also said that of the total 14,378 positive COVID-19 cases; 4,291 are linked to Tablighi Jamaat congregation which was held in Delhi earlier in March.

Aggarwal also mentioned that the mortality rate in India is around 3.3 per cent and the highest deaths have been reported in the age group of 60 and above which stands at 75.3 per cent.

Economy Will Be Given Momentum in Phases Amid Lockdown: Pawar

Maharashtra Deputy Chief Minister Ajit Pawar on Saturday said the state’s economy will be given momentum in phases during the COVID-19 lockdown, which will remain effective till 3 May.

In an official statement, Pawar said the railway and metro services will remain non-operational, while public events and outdoor celebration of festivals will also not be allowed during the lockdown.

“The lockdown will be observed strictly. But at the same time, permission has been granted in a limited manner in keeping with COVID-19 guidelines to ensure that essential services remain uninterrupted, farming-related activities begin on time and to give stimuli to the economy,” he said, according to PTI.

Ludhiana ACP Passes Away From COVID-19

Ludhiana Assistant Commissioner of Police Anil Kohli has passed away due to COVID-19 at SPS Hospital in Ludhiana, says District Public Relations Office.

Here’s What Will Remain Open Across India From 20 April

The government has released a comprehensive list of the services that will remain functional across the country from 20 April, amid the lockdown. Union Minister Ravi Shankar Prasad released the list on Twitter, but made it clear that these will not be applicable in containment zones.

The total number of coronavirus positive cases in Gujarat rose to 1,272 on Saturday after 176 more people were found to be infected, a state Health department official said.

Most of the cases were detected in the hotspot areas where surveillance has been stepped up. Gujarat also reported seven more deaths due to COVID-19 disease, taking their tally to 48.

Chief Minister Pema Khandu visited the Banderdewa check gate at the Assam- Arunachal Pradesh border near Itanagar and reviewed the measures taken to screen those entering the state in the wake of the coronavirus outbreak.

He spoke to police and administrative officials deployed there, besides the health workers on duty.

The Kerala government was contemplating bringing back in three phases the expatriates, who are stranded in various countries due to COVID-19 lockdown, once the air services resume, reported PTI.

Elaborate arrangements would be made for the return of the Non Resident Keralites (NRK)s, Chief Minister Pinarayi Vijayan said on Friday at a high level meeting, a government press release said.

A Public Interest Litigation has been filed in the Supreme Court seeking permission to return home for those migrant labourers, who test negative for COVID-19. The PIL also states ‘government should allow for their safe travel to their hometowns and villages and provide necessary transportation”, ANI reports.

Congress leader Rahul Gandhi on Saturday described the COVID-19 pandemic as a “huge challenge” as well as an “opportunity”, saying there is a need to mobilise the country’s scientists, engineers and data experts to work on innovative solutions to the crisis.

Walmart Inc and e-commerce major Flipkart will spend Rs 38.3 crore towards in-kind donations into India to help with the front-line response efforts, a statement said, according to PTI.

A 65-year-old COVID-19 patient died at the Government Medical College and Hospital in Maharashtra’s Aurangabad city in the early hours of Saturday, an official said, according to PTI.

This is the third coronavirus-related death in Aurangabad district, he said.

Delhi Health Minister Satyendar Jain on Saturday said that there are 1,767 COVID-19 positive cases in Delhi, out of which 67 were reported on Friday. There have been 42 deaths in the national capital, 911 patients are admitted at hospitals, of which 27 are in ICUs and 6 are on ventilators, he added, according to ANI.

He also said that they have received 42,000 rapid kits, which will be used in containment zones starting from Sunday.

12 more COVID-19 cases have been reported from 5 pm on Friday till 12 pm on Saturday in Karnataka, ANI reports, quoting the state government. This takes the total cases in the state to 371, including 92 discharged and 13 deaths.

Kerala Man Did Not Pass Away From COVID-19: Health Minister

Kerala Health Minister KK Shailaja said that the 85-year-old man in Kerala did not pass away due to COVID19 and was suffering from age-related ailments. The body will be handed over to his family, COVID19 protocol for cremation does not need to be followed, she added, according to ANI.

An Air India B-787 aircraft has left for Guangzhou, China from Delhi to pick up medical supplies, ANI reports.

An 85-year-old man in Kerala who earlier tested positive for COVID-19 and later tested negative in repeat tests, passed away on Saturday morning. His last COVID-19 test results are awaited, ANI reports.

He was kept under observation at Manjeri Govt Medical College as he was suffering from age-related ailments.

China’s imported cases of coronavirus increased to 1,566 with 27 fresh ones, while its revised death toll stood at 4,632 with 50 per cent jump in fatality figures from the epicentre Wuhan, health officials said on Saturday.

Under fire for not having a full-time health minister amid the COVID-19 pandemic, the BJP government in Madhya Pradesh has constituted an advisory committee, comprising Nobel laureate Kailash Satyarthi and 12 others, to deal with the crisis, according to PTI.

The state does not have a council of ministers ever since senior BJP leader Shivraj Singh Chouhan took over the chief minister on 23 March.

A woman who had delivered a baby two days ago at Ranchi’s Sadar Hospital, tested positive for coronavirus on Friday. Her child has been admitted to the isolation ward at RIMS hospital. The Sadar Hospital staff that had attended the woman will now undergo tests, the Ranchi Administration said, according to ANI.

The baby is under proper care and all precautions are being taken and its sample will be sent for testing today.

The Odisha police has come out with an initiative through which policemen will contact women who had earlier reported domestic violence to enquire about their condition over the phone during the ongoing lockdown, an official said on Saturday, according to PTI.

The special drive -Phone-Up Programme- has been launched across the state to deal with the problems of domestic violence in the crisis period, he said.

Four new COVID-19 positive cases have been reported in Nagpur on Saturday, taking the total in the district to 63, the Nagpur Municipal Corporation said, according to ANI.

Show-Cause Noticed Issued to LPU Over Violation of Govt Orders

Punjab Department of Higher Education has issued a show-cause notice to Lovely Professional University, Jalandhar for ‘violating government orders & putting in danger lives of about 3200 people’ by ‘not shutting down completely’, according to ANI.

41 more coronavirus cases and two deaths (in Jaipur) have been reported in Rajasthan on Saturday, taking the total number of positive cases in the state to 1,270. The total number of deaths has risen to 19, ANI reports.

Two more persons have tested positive for COVID-19 in Bihar, taking the total number of coronavirus cases in the state to 85, a top official said on Saturday, PTI reports.

Kalaburagi Deputy Commissioner Sharat B has ordered that student hostels at Gulbarga University and Central University of Karnataka are to be temporarily converted into quarantine centres, ANI reports.

India’s total number of cases has risen to 14,378 on Saturday, 18 April, according to data from the Ministry of Health and Family Welfare. The number of deaths has risen to 480, while those cured/discharged stands at 1,991.

At least 20 Indian Navy personnel have tested positive for COVID-19, ringing alarm bells for the military at a time when the US Navy is grappling with a surge in coronavirus cases on some of its frontline warships, according to the Hindustan Times.

Coronavirus deaths worldwide have crossed 150,000, according to an AFP tally.

The US Justice Department moved to halt sales of a chemical agent marketed by a self-described church group in Florida as a “miracle” coronavirus cure, according to AFP.

The department filed a complaint on Friday against the Genesis II Church of Health and Healing, and several of its key members, for their promotion of “Miracle Mineral Solution” (MMS).

A federal judge in Florida quickly granted a temporary injunction halting its sale and distribution.

The United States passed 700,000 confirmed coronavirus cases, according to a tally maintained by Johns Hopkins University.

Are you Arachnophobiac?; maybe, read this to find out

THE WORLD’S MOST EXPENSIVE DRINKS EVER SOLD

Pegasus snooping: The Supreme Court will hear petitions for an investigation on August 5th

Maharashtra’s first Zika virus case has been discovered, but officials say there is no need for panic

For travel to Karnataka, an RT-PCR test is required

To cross Walayar from Kerala, an RT-PCR or vaccination certificate is required