Using data from nearly three-quarters of the world’s countries, a new analysis from the Organization for Economic Cooperation and Development (OECD) found that students who do not regularly eat with their parents are significantly more likely to be truant at school. The average truancy rate in the two weeks before the International Program for International Student Assessment (PISA), a test administered to 15-year-olds by the OECD and used in the analysis as a measure for absenteeism, was about 15 per cent throughout the world on average, but it was nearly 30 per cent when pupils reported they didn’t often share meals with their families. There are two big reasons for these negative effects associated with not eating meals together: the first is simply that when we eat out—especially at the inexpensive fast food and take-out places that most children go to when not eating with their family—we tend not to eat very healthy things. As Michael Pollan wrote in his most recent book, Cooked, meals eaten outside of the home are almost uniformly less healthy than homemade foods, generally having higher fat, salt, and caloric content.

The other reason is that eating alone can be alienating. The dinner table can act as a unifier, a place of community. Sharing a meal is an excuse to catch up and talk, one of the few times where people are happy to put aside their work and take time out of their day.

In many countries, mealtime is treated as sacred. In France, for instance, while it is acceptable to eat by oneself, one should never rush a meal. A frenzied salad muncher on the métro invites dirty glares, and employees are given at least an hour for lunch. In many Mexican cities, townspeople will eat together with friends and family in central areas like parks or town squares. In Cambodia, villagers spread out colourful mats and bring food to share with loved ones like a potluck.

In her book Eating Together, Alice Julier argues that dining together can radically shift people’s perspectives: It reduces people’s perceptions of inequality, and diners tend to view those of different races, genders, and socioeconomic backgrounds as more equal than they would in other social scenarios.

The equation for physical and psychological well-being is easy: Eat simply and eat together.

It seems snobbish to take time to eat good food with one’s family. The Norman Rockwell portrait of the family around the dinner table now seems less middle-class and more Haute bourgeois, as many families can’t afford to have one parent stay home from work, spending his or her day cleaning and cooking a roast and side of potatoes for the spouse and kids. Most parents don’t have time to cook, many don’t even know-how, and the idea that one should spend extra money and time picking up produce at the supermarket rather than grabbing a bucket of Chinese take-out can seem unfeasible, unnecessary, and slightly pretentious. It’s understandable to want to save time and money. It’s the same reason that small shops go out of business once Walmart moves into town; but in this case, it is not the shop owner who suffers, it is the consumer of unhealthy and rushed meals.

How then do we eat better, not just from a nutritional perspective, but from a psychological one as well?

“To eat is a necessity, but to eat intelligently is an art,” said the 17th-century writer François de La Rochefoucauld. What “intelligence” means in the context of eating is debatable. There are those who obsess over their food—where it is sourced, if it is organic, the nebulous desire for culinary “originality”—who is known in the U.S. as “foodies” and in France as generation Le Fooding, both of which are the hipsters of cuisine, moneyed and sometimes picky. But this doesn’t seem quite like “intelligence” as de La Rochefoucauld meant it. 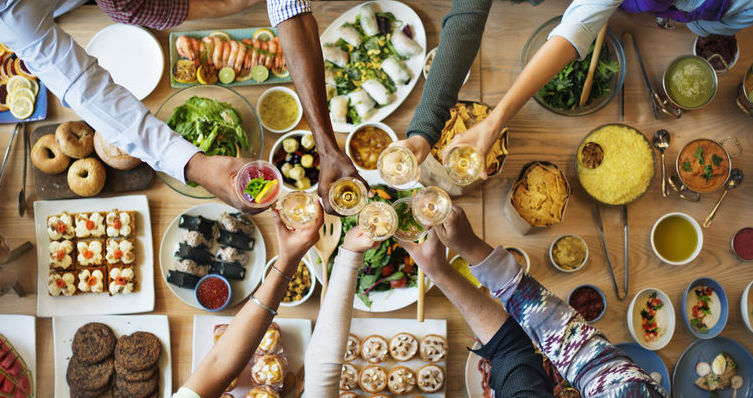 Perhaps to “eat intelligently,” one needs only to eat together. Although it would be nice to eat healthily as well, even take-out makes for a decent enough meal, psychologically speaking, so long as your family, roommates, or friends are present.

It’s incredible what we’re willing to make time for if we’re motivated. (Although we often end up just a bit too squeezed to make it to the gym in the morning, we can still find time to go to the movies after work.) Perhaps seeing eating together not as another appointment on a busy schedule, but rather as an opportunity to de-stress, a chance to catch up with those whom we love then, could help our children do better in school, get in better shape, and be less likely to abuse drugs and alcohol. Eating together also led children to report better relationships with their parents and surely relationships between adults can similarly benefit.

How to Make Your Neck Look Younger than before