Mia Khalifa recently announced the launch of her new apparel line. Yes, former porn star Mia Khalifa is now a clothing designer, and she has already launched a line of swimwear made by her.
If you look at her most recent Instagram post, you’ll notice that her photos were taken in California, USA. Her bikini has a tropical motif with a green and blue floral design.
Mia revealed the debut date for her clothing collection, which is August 20, 2021. Mia Khalifa remarked that she has been working on it for a long time and would like to thank key people associated with this company. 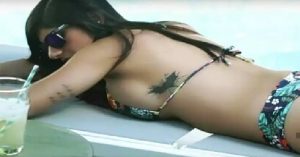 Mia, together with the CEO, praised the staff for their efforts in launching her bikini line. Her caption on Instagram stated, “SVN x MIA FRIDAY 8/20! I’ve been working on this for SO LONG and wanted to take the time to thank Hannah Hayes, CEO of @svnswim, and @lisaflip for their hard work in making this possible. I adore and adore you fucking fucking fucking fucking fucking fucking fucking fucking f
The stated business applauded her creation on its official social media account for being seductive, comfortable, and one-of-a-kind. They also stated the color options and sizes that will be available. Mia announced her divorce from her spouse Robert Sandberg a few weeks ago, following two years of marriage. 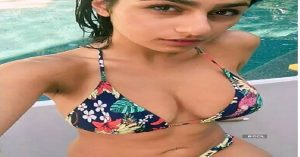 In a message uploaded on social media, Mia stated that they gave it all to make the marriage work, including counseling and efforts. Khalifa indicated that their breakup was not the result of a single incident, but rather of ‘unresolvable and fundamental conflicts.’
“We are concluding this chapter with no regrets and both beginning our own, individually but connected by a great family, friends, and love for our dogs,” she said. This has been a long time coming, but we’re glad we took our time and gave it our all, and can walk away knowing we gave it our all.”

Salima Mazari, a female Afghan governor who fought the Taliban in Balkh Province, was apprehended