Ranveer Singh and Alia Bhatt Starrer’Gully Boy’ is winning millions of hearts owing to its powerful dialogues,the raw acting of the lead pair and the songs. Everything is being loved by the audience and everyone is saying ‘Apna Time Aayega’.

The’Gully Boy’ fever has now hit Grammy Award winner Diplo as well. He took to his Twitter handle to pay a special tribute to Ranveer and the film with the help of a meme. Diplo posted the first poster of the film that was released with Ranveer in a hoodie.He photoshopped Ranveer’s photo and put his picture on the poster and instead of Gully Boy,he wrote,”Random White Guy”. 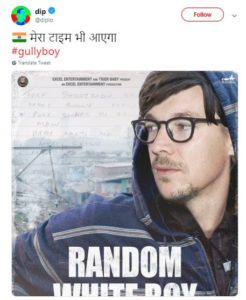 He tweeted this poster with a caption stating,”Mera Time Bhi Aayega#gullyboy”. Diplo also attached India’s flag to his tweet and we truly happy to see the kind of recognition Indian films like”Gully Boy” are getting internationally.

This poster of the film had become viral and there were various memes made on it too. Reportedly,today,the much-awaited screening of the film is being held at Berlin Film Festival.

‘Gully Boy’is inspired by the lives of Mumbai Street rapper Vivian Fernandes aka Divine and Naved Shaikh aka Naezy.The film is directed by Zoya Akhtar and is set to release on Valentine’s Day, February 14.The movie revolves around the underground rap movement in India and all the songs of film are hitting the chart busters.

Nitin Gadkari to set on foot for Ayodhya Highway projects