PRAYAGRAJ: Uttar Pradesh Chief Minister Yogi Adityanath said that the Prime Minister of Mauritius, who came to India in 2013, had to leave without taking a holy dip at Sangam because of the pollution and filth that prevailed in the river during that time.

“In 2013 the Prime Minister of Mauritius came to India to take a holy dip, but saw pollution, filth, foul smell and mismanagement, and went back without taking a dip in Ganga and paid obeisance from a distance,” said Yogi Adityanath.

Mr. Yogi made his statement while addressing a press conference after the conclusion of the Prayagraj Kumbh Mela 2019 on Tuesday. His statement further added that this time, the Mauritian Prime Minister Pravind Jugnauth, who visited the Kumbh, “could not stop himself and took a dip in the river”.

He said that the state of the river has improved significantly due to the efforts of the Prime Minister Narendra Modi-led government, both at the Centre and the state. 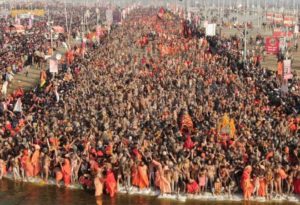 He went on to explain the importance of the festival and more than 3,200 Non-Resident Indians or NRIs visited the Kumbh Mela and for the first time Ambassadors from 70 countries also came for the Kumbh. “This is an achievement in itself,” Mr Adityanath said.

Kumbh Mela is the largest human congregation in the world, where pilgrims participate in the festival with the belief that taking a dip in the holy water of the Ganga river will pave the way for their salvation and would rid them of their sins. The 55-day Kumbh Mela ended on March 4.