After taking down Pakistan’s F-16 jet with his Mig 21 Bison, Abhinandan is now taking over the pop culture.
Merchandise with his imprints, his gunslinger meet mutton chop beard moustache, are already in demand, then there are parents who are naming their kids Abhinandan.

Just google his name. There will be plenty of options. From T-shirts and accessories with his picture, his iconic moustache, and his famous ‘I am not supposed to tell you this’ printed across them.Websites such as T-Shirt Bhaiya, Fully Filmy, Amazon and Eknumber in are selling clothes with ‘Abhinandan’ prints.

Why say more, our Board of Control for Cricket in India (BCCI) has released a special jersey to honour the hero. BCCI’s official Twitter handle tweeted a picture of the jersey on the day of Varthaman’s release that read,
“#WelcomeHomeAbhinandan You rule the skies and you rule our hearts. Your courage and dignity will inspire generations to come ?? #TeamIndia” 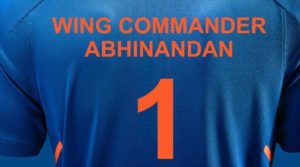 All Desi (local) and urban market like Janpath and Sarojini Nagar are getting a lot of inquires for such merchandise.

The trend has conquered restaurants too. They offers discounts and freebies to celebrate the hero, one such example is Pizza Hut. They offered free pizzas to any customer who has the name- Abhinandan.
That’s not all! As always,this time too his name has become a top choice for baby names for new parents.

The twitteratti are also sharing posts about people who are naming their kids after the Indian Airforce pilot. Navpreet singh, a Delhi-based entrepreneur, shares with us, “My wife is due in April, and if we have a baby boy, we will name him Abhinandan. I really admire his courage, and naming my kid after a real hero will be my way of showing respect to the armed forces who do their all for the country.”

The Bolo App : a speech-based reading-tutor app for rural kids to give access to a good education support system