The police in Pakistan have arrested seven people who were allegedly involved in arranging the marriage of two minor Hindu girls who were abducted and forcefully converted to Islam, hours after a spat between Indian and Pakistani ministers over the treatment of minorities.

On Sunday, police conducted raids in Rahim Yar Khan district of Punjab province – where the girls were reportedly taken from Ghotki in Sindh province – and arrested the man who solemnized the marriages, a leader of Pakistan Sunni Tehreek and relatives of the men who married the teenage girls.l;

The suspects were handed over to the Sindh Police. The deputy commissioner and superintendent of police of Ghotki visited the families of the girls and informed them of the arrests. Police officials said action is being taken to recover the girls.

Police said a kidnapping case was registered at Daharki police station in Sindh. However, the girls also approached a court on Sunday, seeking protection.

The government has taken action after two videos of the marriages did the rounds on social media. The father and brother of the two sisters said they were abducted and forcibly converted to Islam. However, a video showed the girls saying they had accepted Islam of their free will.

Prime Minister Imran Khan ordered the Sindh government to launch a probe into reports that the girls were abducted and forcibly converted.

After external affairs minister Sushma Swaraj tweeted on Sunday that she had sought a report on the incident from the Indian envoy in Islamabad, Pakistan’s information minister Fawad Chaudhry responded by saying it was an “internal issue” and that Swaraj should act with the “same diligence” about India’s minorities.

Ramesh Kumar Vankwani, a prominent Hindu lawmaker from the ruling Pakistan Tehreek-e-Insaf party, said he would submit a resolution during the National Assembly’s next session to demand an end to forced conversions.

Members of civil society gathered outside the Karachi Press Club on Sunday to protest against the alleged abduction and forced conversion of the teenage Hindu sisters. The protesters reminded the provincial government of the Child Marriage Restraint Act passed by the Sindh Assembly in 2014 that makes the minimum age of marriage 18 years and states that forcing a person younger than that age to marry is a punishable offence. 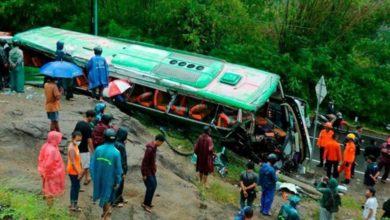