Bharatiya Janata Party (BJP) on Tuesday night announced that they will field Malayalam actor Suresh Gopi as their candidate from the Thrissur Lok Sabha constituency for the upcoming polls. The decision was announced by the BJP Central Election Committee on Tuesday night.

The actor has told the media that, “The National Secretary of the party, on the directions given by PM Modi had called me yesterday morning and requested me to contest in the elections and I agreed.”

Along with Pathanamthitta and Thiruvananthapuram, Thrissur is a constituency that the BJP has great winning chances.

The 60-year-old actor who is currently a Rajya Sabha member is expected to give a tough fight to TN Prathapan of UDF and Rajaji Mathew Thomas, the candidate for the LDF.

The actor had become an extremely popular action hero in the 90’s and has played leading roles in many films. 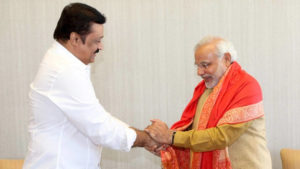 The Commissioner actor joined the BJP in 2016 October after meeting PM Narendra Modi. Suresh Gopi, who has been a huge supporter of Modi’s brand of politics since then has told the media that he had agreed to contest as Modi himself had asked to do so.

The speculations were rife that the actor will be contesting from either the Thiruvananthapuram constituency or the Kollam constituency.