Actor Ramya Krishnan has been finalised to work alongside Amitabh Bachchan in his maiden Tamil outing Uyarntha Manithan, The shooting has already started. They worked together in Bade Miyan Chote Miyan, 20 years ago. Ramya and Amitabh are pairing up together in Uyarntha Manithan, which stars SJ Suryah in the titular role.

Director Tamilvaanan has confirmed the news. “Ramya ma’am has already started shooting for the film, and she will be filming with us for another week. We are shooting in Mumbai now, and she’s paired opposite Amitabhji. The fact that two actors of such high calibre are coming together after such a long gap is quite exciting. She was quite happy to do this role.”

Suryah shared the first glimpse of Big B from the project on Sunday. Wearing a dhoti with a golden border and sporting red gamcha, the pictures went viral on social media in no time. Suryah took to twitter to share the pictures. He wrote: “Happiest moment of my life. Thank you God, mom and dad for fulfilling a dream which I have never even dreamt of.” He went on to thank Amitabh for working alongside him. 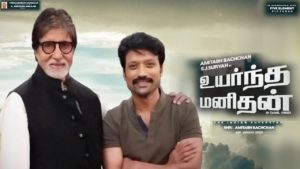 During the launch of Uyarntha Manithan last year, Suryah said: “Even before I ventured into showbiz as an assistant director, I craved for this moment to work with him. Now, to see it happening sends gold rush into my veins, but at the same time, I’m nervous to imagine that I am going to share the screen space with him.”

So the news of Ramya joining the cast cast of Uyarntha Manithan is elevating our expectations to a different level. We wish the team all the best to complete the filming sooner.

Strike : The upcoming Electric Superbike of Lightning promises a range of 150 kms in 20 minutes of charging