Dudheshwar Nath temple in Ghaziabad is one of the oldest temples of lord Shiva in western Uttar Pradesh. The temple is 600 years old. It is a favourite destination for politicians, especially during the election season.

Spread across 12 bighas of land, the temple is located in the heart of the Ghaziabad city – behind the MMG Government district hospital on GT Road. The temple is also famous among the devotees and kanwariyas. According to the temple management, around 20 lakh Kanwariyas offer Gangajal here during the Kanwar Yatra.

The 16th Mahant of the temple, Mahant Narayan Giri, says politicians arrive here to get blessings ahead of the elections.

He added that Surendra Kumar Munni – whose candidature was later cancelled by the Samajwadi Party – had also come to the temple to offer prayers – both before and after getting the party ticket. The SP, however, later gave Suresh Bansal the ticket from the area. 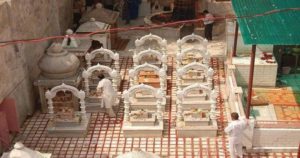 “During 2014 elections, Aam Aadmi Party candidate Shazia Ilmi had also visited the temple. All politicians make it a point to visit the temple. They may come here to attract people as the temple is highly revered among the masses. But we simply perform puja for them – like all other. Even chief minister Yogi Adityanath had recently visited the temple before attending his election rally,” he maintained.

“Adityanath is also the Mahant of the Gorakhnath Math in Gorakhpur. He requested me to accompany him and I could not decline out of respect,” Giri added.

The temple is visited by thousands of devotees each day who arrive to offer prayers from across the city.

“Politicians generally go to religious places during elections and offer prayers and seek blessings of lord Shiva for their win. Many of them offer prayers but some of them also go to such places to garners votes as religion is attached to the sentiments of people. So the politicians feel that they can garner votes and make inroads into voters of a particular community,” said Veenu Baba, an elderly resident of Chandrapuri.