Have a look at the poster- 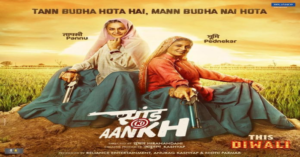 Directed by Tushar Hiranandani, Saand Ki Aankh showcases the story of India’s oldest sharpshooters, who began sharpshooting in their fifties. The film will jointly be produced by Anurag Kashyap and Nidhi Parmar.

The film will hit the screens on Diwali this year.