Prithvi Shaw, who made his International debut in the Test series against the Windies last year, has often been compared with Sachin Tendulkar with his flawless batting style and technique.

On Thursday, Prithvi Shaw, who plays for Delhi Capitals in the Indian Premier League (IPL), met Mumbai Indians’ team icon Sachin Tendulkar and fans could not contain their excitement. Shaw enjoyed a dinner with the batting legend and took to Twitter to post a picture of the iconic meeting. 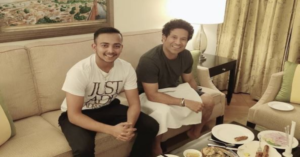 Delhi Capitals, who won their last three games against Royal Challengers Bangalore, Kolkata Knight Riders and SunRisers Hyderabad, looks to continue their winning streak when they take on Mumbai Indians at the Feroz Shah Kotla stadium on Thursday.

Prithvi Shaw, who has not been included in India’s 15-man squad for World Cup 2019, will be eager to help his IPL franchise qualify for the playoffs this year.

Delhi Capitals have not entered in the top four since 2012. The presence and ability of this youngster will be a key factor in deciding the position of Delhi in the ongoing edition of Indian Premier League.

Namrata Shirodkar expresses her fondness yet again for Mahesh Babu

'PM Narendra Modi' screened for EC officials : SC to hear it on 22