The Greeks ultimately gave us the walnut we are all familiar with today through selective breeding that was used to enlarge the nutmeat (the part of the nut that is eaten). However, since walnuts were brought to world markets by English merchants they became known as English walnuts. Learn more about the History of the Walnut in our extensive article on the subject.

Generally, the walnuts you see on your supermarket shelf are the English variety. Easy to crack open, they add taste and texture to cookies, cakes, yogurt, cereal and oatmeal, salads and vegetables. Harder-to-find black walnuts have a bold, earthy flavour and require a lot of work to get them out of their shells. They’re difficult to the hull, and the husks can stain your hands. Both, however, offer plenty of nutritious benefits.

English walnuts, or Juglans regia, derive from the Middle East and are so-named because British merchants sold them throughout the world. In the 1700s, Spanish missionaries started growing walnut trees in California. Today, 99 percent of English walnuts sold in the United States — and two-thirds of those sold in the world — come from the San Joaquin and Sacramento Valleys. Black walnuts, or Juglans nigra, originate in the United States, where they grow wild. They are much less cultivated than are English walnuts.

A major benefit of eating walnuts is a healthy dose of omega-3 polyunsaturated fats. Walnuts contain alpha-linolenic acid, or ALA, the plant-based source of omega-3 fats. A steady diet of these omega-3 fats helps lower blood pressure and bad cholesterol, decrease inflammation, prevent blood clots, strengthen bones, increase cognitive function and lower risk of heart disease, cancer, diabetes and metabolic syndrome. Although they’re high in calories, walnuts can actually help you lose weight because they are low in saturated fats and high in fiber. 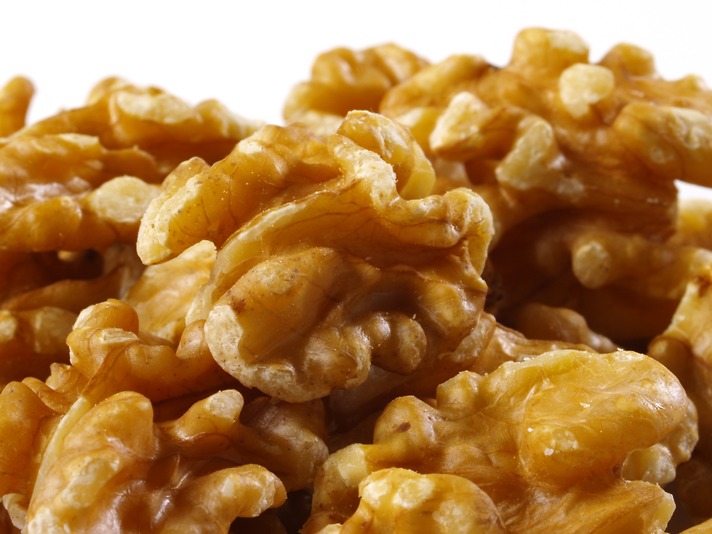 From a handful of English walnuts, about 1 ounce or seven whole ones, you get 190 calories, 4 grams of protein and 2 grams of fiber, along with high amounts of vitamin E, potassium, copper, phosphorus and magnesium, according to the California Walnut Commission. You can buy them unshelled, halved or in broken pieces. One ounce black walnuts contain about the same amount of calories, protein and fiber. Also high in potassium, magnesium, phosphorus and vitamin E, black walnuts have less omega-3 than do English walnuts, but more arginine and selenium, according to the University of Missouri Center of Agroforestry. Often handpicked in the wild, black walnuts are a popular ingredient in ice cream. They are more expensive than English walnuts.

Since the polyunsaturated fat in walnuts can oxidize quickly, store walnuts in the refrigerator or freezer in an airtight container.

A November 2016 randomized, double-blind, placebo-controlled study published in the journal Nutrients showed that walnuts were able to improve mood in healthy males who were not depressed. Females in the study did not see any effect on mood.

Another study published in Nutrients, this one in the January 2019 issue, showed that depression scores were significantly lower among people who eat nuts, particularly walnuts when compared to people who don’t eat nuts.

In addition, a December 2014 cross-sectional study published in the Journal of Nutrition, Health & Aging showed that eating walnuts is associated with better performance on cognitive function tests, including tests for memory, information processing speed and concentration. The study showed that age, ethnicity and gender did not matter. Memory and concentration improved in those who consumed walnuts.

The most common varieties of walnuts are black walnuts and English walnuts, according to the Green Cuisine Trust. Walnuts are usually harvested from August through November and are stored with their shells intact so that they can stay suitable for sale and consumption for the rest of the year.

Thus you can go to a grocery store and buy shelled walnuts during fall and winter. They do, however, need to stay in their shells to the last longer, which means that if you want walnuts year-round, you’re better off buying the unshelled varieties, which are typically sold in bulk.

Regardless of whether your walnuts are shelled or unshelled, store them in an airtight container at a cool temperature. You can put them in the refrigerator only if you’ll eat them a few days after you buy them. If you want to store them for longer, it’s better to keep them in the freezer.