Kollam: A young woman who had only been married a year was discovered hanging at her husband’s house in Sooranadu here early on Monday. 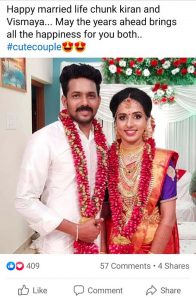 S V Vismaya, 24, most likely took the extreme step as a result of dowry harassment from her in-laws. She was discovered hanging inside the washroom of the Chandravilasam house in Sooranadu’s Poruvazhi area.

Her relatives labelled it dowry murder. They have released images that show she was severely beaten. Messages indicating domestic violence were also distributed as soon as the tragic news broke.

Vismaya had sent the messages and images to a relative via WhatsApp on Sunday. She had revealed that she had been subjected to severe beatings at her husband’s home.

The pictures show injuries to the face and arms.

Vismaya married Kiran, a Sooranadu resident, on May 31, 2020. Her parents live in the Kaithode neighbourhood of Nilamel in the Kollam district.

The case is being investigated by the police in Sooranadu.

The case is being investigated by the police in Sooranadu.

A case has been opened. According to Shahida Kamal, a member of the Kerala Women’s Commission, the Kollam (Rural) SP has been asked to submit a report.